A series of lectures for the teachers,   undergraduates and Master’s degree students of the Faculty of Physics and Information Technologies was delivered by Dumitru Luca, a well-known scientist, Professor Emeritus of the Alexandru Ioan Cuza University (Iasi, Romania).

Professor Luca is a longtime friend of Francisk Skorina Gomel State University. He is a member of the Romanian, European and American Physical Societies, as well as the European Chemical Society, the author of more than one hundred publications in well-known international publications. His research interests include the study of surface and interface processes in nanostructured thin films, nonlinear phenomena in reactive plasma and new photocatalytic materials.

Cooperation between Gomel State University and the Alexandru Ioan Cuza University was established more than ten years ago. Representatives of the Universities took part in conferences organized within the framework of the Inter-Academy, which was created in 2002. It includes a number of universities from 11 countries: Germany, Hungary, Romania, Poland, the Czech Republic, Slovakia, Latvia, Japan, Belarus, Ukraine and Bulgaria.

As for bilateral cooperation, three joint research projects were carried out by Belarusian and Romanian scientists, and a fourth one is in the making. It is also planned to organize an exchange of students between Francisk Skorina Gomel State University and the Alexandru Ioan Cuza University within the Erasmus + program. Students of the Faculty of Physics and Information Technologies have an opportunity to acquire new knowledge and competencies while studying at a European university.

Meeting with Rector of Francisk Skorina Gomel State University Sergei Khakhomov, Dean of the Faculty of Physics and Information Technologies Dmitry Kovalenko, Head of the Department of optics Vladimir Gaishun and professors Dumitru Luka and Dariusz Hreniak was devoted to discussion of  the future ways and opportunities of cooperation between the Faculty of Physics and Information Technologies of GSU and Alexandru Ioan Cuza University (Iasi, Romania) and the Institute of Low Temperatures and Structural Research (Wroclaw, Poland). 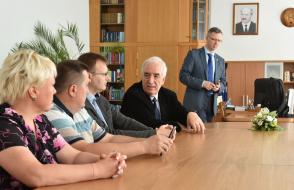 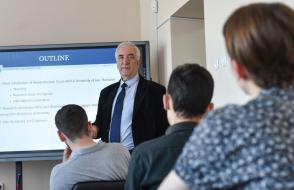 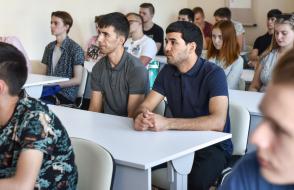