QS EECA University Rankings is a ranking of higher education institutions in developing countries in Europe and Central Asia. This rating has been compiled since 2014 by the British agency Quacquarelli Symonds (QS).

The criteria of QS, which is one of the three most authoritative rankings in the world, are quantitative data about the university. We are talking about the number of students and teachers, foreign teachers and students, citations of scientific papers, the results of surveys of academic experts and employers from around the world.

According to the results of this rating, the Francisk Skorina Gomel State University has become one of the best universities in the countries of this region. 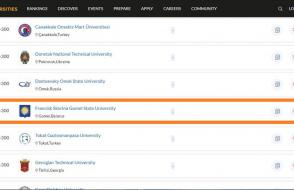